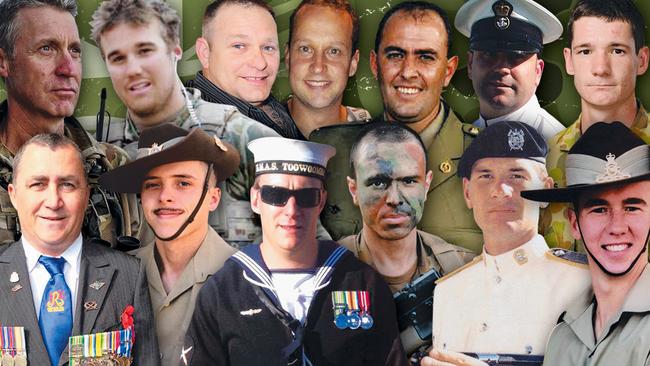 These TED Talks are primarily from the United States and pertain to their veterans. But, the issues are just as applicable for our veterans here in Australia:

11 Jun 2016
Sebastian Junger has seen war up close, and he knows the impact that battlefield trauma has on soldiers.

But he suggests there’s another major cause of pain for veterans when they come home: the experience of leaving the tribal closeness of the military and returning to an alienating and bitterly divided modern society.

Wes Moore: How to talk to veterans about the war

24 May 2014
Wes Moore joined the US Army to pay for college, but the experience became core to who he is. In this heartfelt talk, the the paratrooper and captain—who went on to write “The Other Wes Moore”—explains the shock of returning home from Afghanistan.

He shares the single phrase he heard from civilians on repeat, and shows why it’s just not sufficient. It’s a call for all of us to ask veterans to tell their stories — and listen.

Journalist Sebastian Junger shares his experience embedded with American soldiers at Restrepo, an outpost in Afghanistan’s Korengal Valley that saw heavy combat. Giving a look at the “altered state of mind” that comes with war, he shows how combat gives soldiers an intense experience of connection.

In the end, could it actually be “the opposite of war” that soldiers miss?

Trained not to cry: the challenge of being a soldier | Richard Doss

7 Dec 2016
Members and Veterans of the US Armed Forces have unacceptably high suicide rates.

Why? It’s not the combat experience like one would suggest, but a much more complex issue that needs to be talked about.

Dr. Richard Doss is a Licensed Clinical Psychologist and works for the Veterans Administration Vet Center. He is also a former Department of Defense Suicide Prevention Program Manager for the United States Army Reserve, training commanders, soldiers, and their families on suicide prevention and assisting over 13,000 soldiers in 26 states and Puerto Rico. Certified in Applied Suicide Intervention Skills Training (ASIST), Richard has trained hundreds of Soldiers and their families in the art of Suicide Awareness and Suicide Prevention.

We train soldiers for war. Let’s train them to come home, too | Hector Garcia

Before soldiers are sent into combat, they’re trained on how to function in an immensely dangerous environment. But they also need training on how to return from the battlefield to civilian life, says psychologist Hector Garcia.

Applying the same principles used to prepare soldiers for war, Garcia is helping veterans suffering from PTSD get their lives back.

How the US can address the tragedy of veteran suicide | Charles P. Smith – 22 per day

13 Jun 2020
Veterans in the United States take their own lives at an alarming rate.

Suggesting new ways to prioritize mental health in the military, veterans advocate Charles P. Smith offers a data-driven plan to help prevent suicide and ensure service members get proper care before, during and after active duty.

How to end veteran suicide | Ron Self

12 Nov 2016
America would never send a soldier to fight without basic training. Yet we have sent thousands of vets home unprepared to handle the devastating mental damages of war. Speaking while incarcerated at San Quentin State Prison, former combat veteran Ron G. Self shares his personal struggle and outlines a plan to help our veterans.

In this emotional and informative talk, Mia Gifford shares the personal connection she has with veterans in her life and why this unacceptable epidemic is so rampant.

What can you do to help the suffering veterans in your life?

Meditation can reduce the effects of PTSD allowing peace into a veteran’s life. See how meditation is changing the lives of America’s veterans.

When Erik Younger returned from combat, he thought he knew what the enemy looked like. But returning to civilian life held life-threatening perils of its own.

Erik began experiencing chronic fatigue, fibromyalgia, irritable bowel syndrome, nightmares, hypervigilance, insomnia and depression along with other symptoms frustrating him and his doctors. In 2014, Erik was diagnosed with Post-Traumatic Stress Disorder, which has no cure.

Roughly 22 veterans commit suicide every day and veterans make up 18% of the suicides in the US though they are only 8.5% of the population.

A Journey to Joy After PTSD | Pricilla Martin

15 Feb 2020
This presentation would contain sensitive topics such as PTSD and veteran suicide.

I would share my experience, the impact of loss on our family, and how I have grown and found strength through all of this with my faith, my family, and a newly found passion for PTSD Awareness.

My message is: We will not be victims. We will be advocates.

How the US can address the tragedy of veteran suicide  | Charles P. Smith

Veterans in the United States take their own lives at an alarming rate.

Suggesting new ways to prioritize mental health in the military, veterans advocate Charles P. Smith offers a data-driven plan to help prevent suicide and ensure service members get proper care before, during and after active duty.